Click the link below to read “Starting Out Right: Building on a Puppy’s Natural Drive and Instinct” written by Kathy and published in Clean Run Magazine.

A lady came up to me on the trail today and told me “I like your dog”.

At an agility trial 20 years ago a lady came up to me before I went into the agility ring and said “I know you are busy getting ready to run, but I wanted to say that I always enjoy watching you before and after you run.  It is so clear that you love your dog whether you win or not.”

I thanked her, heard the gate steward calling and quickly went to the gate.  I was thinking about the course, but with overtones of thankfulness.  Nel and I won the class that day and I have never forgotten the kind words which meant so much more than the blue ribbon.

Blue ribbons fade over time, but kindness is always remembered in glorious color.

The person you were kind to five minutes ago is probably being kind to someone right now.

That person you took a moment to compliment on her beautiful gray-muzzled senior dog is filled with the love and memories an oh-so-cute puppy.  Fond memories of days gone by when passers-by would remark on how this dog glowed with youthful energy and vigor.   They both had a spring in their step as they walked away.

Dog people are mostly “love me, love my dog people” and sometimes take other people’s dogs for granted, but as moments are remembered it is so often the simple kindness of somebody saying “what a lovely dog” which stands out beyond the ribbons, titles or accolades. 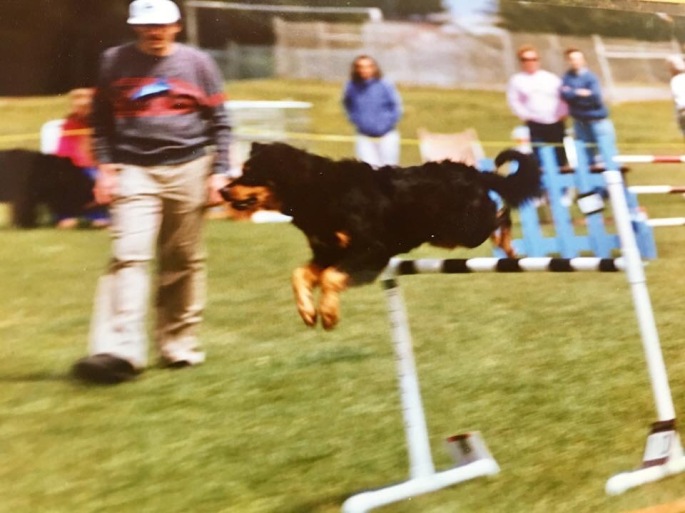 This is just one story of a smart dog and his highly trainable human.

My English Shepherd, Rufus, was the dog who could go anywhere and do anything, but he did require some steering to keep him out of trouble in the foraging department!

I will never forget when we had just arrived in Houston, Texas for the Pedigree Grand Prix of Dog Agility.  Rufus and I had won the trip to USDAA Nationals with flight and hotel paid for by Pedigree Dog Food sponsors of the event, but were unprepared for the high humidity and wildlife of Texas. 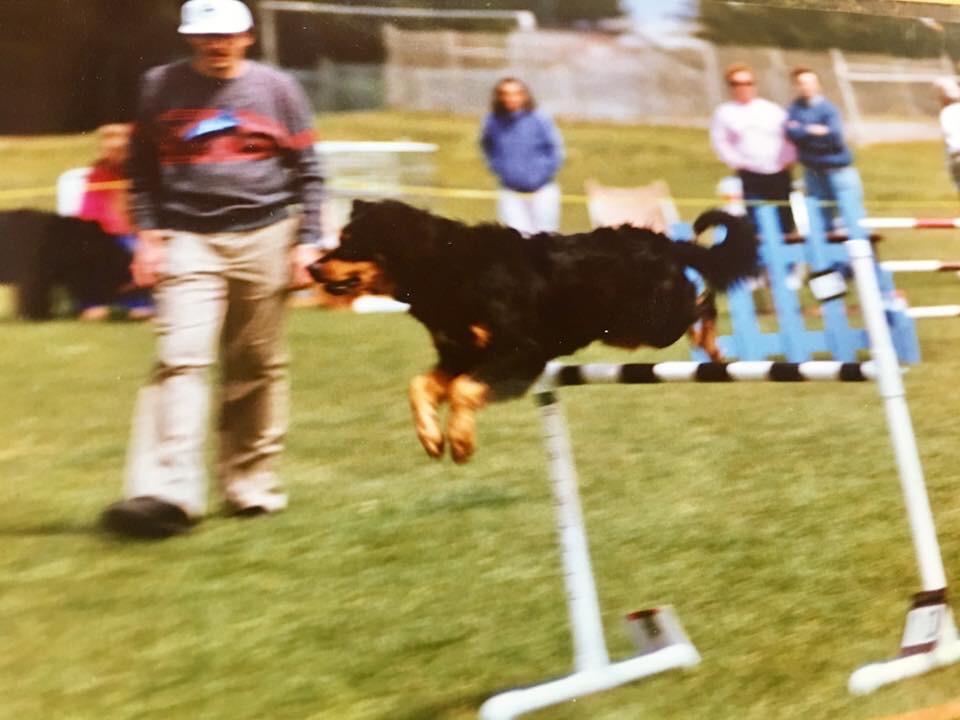 Our first day in Houston and Rufus needed a walk outside before retreating to the relative coolness of our hotel room. What could possibly go wrong?  Two words may give you a clue:  Flexi Leash!

A short way into our walk Rufus managed to pick up a slice of bread which he managed to swallow just as I saw the fire ants that were crawling all over it! We were both stung as I tried in vain to retrieve the bread from his throat, but the biggest problem was yet to come.

As we prepared to run in Grand Prix the next morning I noticed that Rufus appeared somewhat off his game. He was not interested in his toy which was highly unusual. When we ran the course he was clean, but very slightly slower than usual.  He missed the finals that year by .75 of a second.

I was disappointed to be missing the finals because of a slice of white bread and a bunch of fire ants, but wasn’t I fortunate he was not allergic.

This is me with one of my first dogs Rufus.